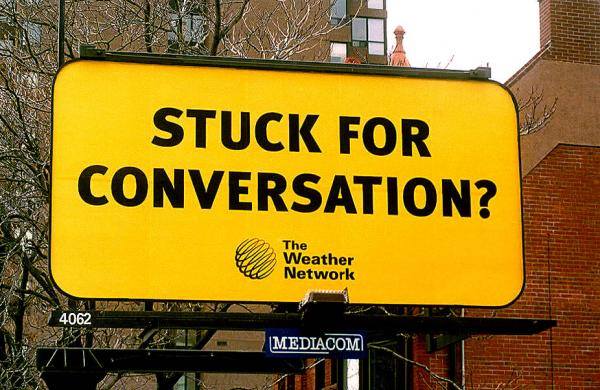 As the people in Derry prepare for a winter that’s as bitter and cold as the Northern Ireland Health Minister, the introverts amongst the public were in a state of panic today, as weather small talk was predicted to be the worst the City has ever encountered.

Following this morning’s bitterly depressing weather, thousands of recluses, depressed people and even the downright ignorant in the City, are understood to be dreading the remainder of December, as taxi drivers, pensioners and shopkeepers get ready to engage in seasonal conversation about the obvious state of the chilly atmosphere. Facebook newsfeeds are also expected to be snowed under with pictures of light blizzards and sleet later this month, sharing them for the benefit of those users that have no windows in their homes.

Discussion initiations such as “It’s cold isn’t it?” and “Jesus it would cut the hair of a mountain goat” had driven Culmore teenager Emo Heskey to Gransha Mental Hospital for treatment last Christmas as he described the situation as ‘pulling teeth’, literally. “I just couldn’t listen to it anymore, I had to get a taxi every single day to and from work and all he kept talking about was how it’s expected to get worse the next day, and it always did. I eventually ended up pulling a couple of my teeth out with my da’s pliers”.

‘That’s no mean feat I’ll tell you’ he added. ‘It’s fuckin Baltic out in me Da’s tool shed’

Smalltalk Ombudsman Frankie Phuckpot has issued a warning last night to the Derry public, advising anyone who wishes to avoid weather smalltalk to ‘stay indoors and avoid social networks’.

In an appeal to the public to stay safe he continued. ‘If you have to get shopping supplies, then refrain from going to smaller retailers such as Costcutters or Day Today, and, if it is necessary for you to travel by taxi, phone a friend during the journey or put in your headphones and pretend to be listening to music.’

‘Ack sure enough about that now.’ he added, changing the subject away from matters of smalltalk. ‘Are ye all set for Christmas yet?’