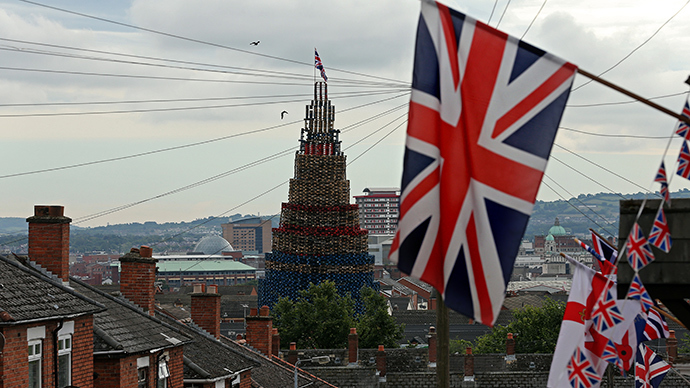 The union between Northern Ireland and Great Britain grew considerably stronger overnight, following 48 hours of peaceful aggressive Britishness by Ulster protestants. London this morning reported that the constitutional agreement between the two landmasses is now miraculously printed on an even thicker 120gsm paper and that the ink looks ‘black as fuck’.

Across the province, weird occurrences are being reported to the Police Service of Northern Ireland, at their new headquarters in Salford, Manchester. Old BT phone boxes are believed to be looking ‘redder than the red hand of Ulster after slapping down uppity Fenians’, whilst stocks of Marmite, PG Tea and HP Sauce are selling out fast at supermarkets throughout Ulster.

‘Keep Calm and Contact The British Consulate’ appealed Martin McGuinness this morning to fretting republicans over his breakfast of a Ploughman’s sandwich with lashings of Colemans mustard. But the words did nothing to quell the growing British surge, as dissident republicans met in secret to discuss the bowler hat shortage currently sweeping Creggan.

This swell of Britishness follows several successive years of triumphant Irishness, were Republican protestors have almost singlehandedly brought about a United Ireland, by scribbling out ‘London’ on signs approaching the city and giving wile beatings to people who smoke cannabis.

It is believed the British government had been considering handing the expensive burden of Northern Ireland back this week, until economists reported that the province’s resupply order of wooden pallets and tyres would save the NHS.

Despite this opportunity to realise one of the Conservative Party’s long term goals, a Downing Street source said the PM had decided to keep NI anyway.