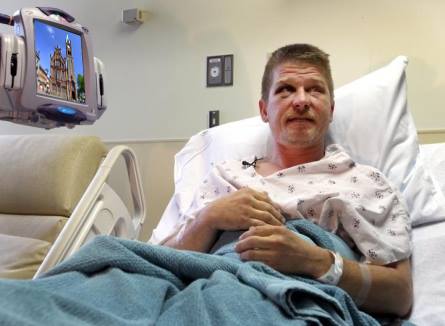 Local anti-social behaviour is ‘on the decline’ according statistics, with some areas of the city now reportedly safer than getting a blow-back from an electric cigarette. Unfortunately however this wasn’t the reality for 45 year old Hazelbank man Lego McConnell, after he was viciously attacked in the early hours of Saturday morning by the Guildhall.

Mr. McConnell claims that he was walking home from a line dancing convention in the Tower Hotel, when was attacked by the landmark building in the Guildhall Square, which he claims was an ‘unprovoked assault.’

“I was walking home as I had a few scoops in me and had no dough left for a taxi. I remember walking past the Guildhall, and it asked me if I had the time.”

“I thought that it was a wee bit strange” he continued. “I mean it has a clock for a face and should know the time better than anyone, don’t ye think? But when I made a joke about it, it got really upset and shouted ‘are you trying to wind me up, hi?’ and then just started punching me in the bake and pulling my hair.”

“I can’t really remember much after that, next minute I woke up in the hospital”.

McConnell suffered two black eyes, chipped tooth and severe bruising on his back and ego. Deputy First Minister Martin Mc Guinness has strongly condemned the attack, taking to Twitter to question whether Derry’s Guildhall was now a member of the UVF, Orange Order or both.

The Guildhall released a statement this morning categorically denying the assault, protesting it’s innocence in the whole affair. This provoked Mr McConnell to take to Facebook to call the landmark a ‘two faced c**t’.