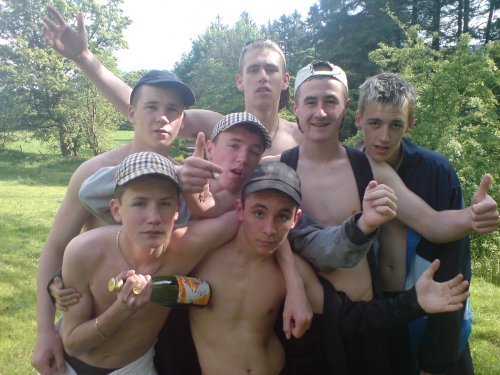 Staff at world famous Brooke Park ‘fear huge job losses’ are ahead, after the park suffered it’s worst sunny weather week in history. The park, which was opened 1901 as a place for Derry wans to drink carry-outs, take their tops aff and kick footballs about when the sun came out, was almost empty during the town’s recent ‘heatwave’.

It seems locals ruthlessly switched allegiances to the Waterside in the last few days, using the landmark Peace Bridge to transport themselves and an estimated 29,000 blue plastic bags, over the River Foyle to it’s bitter rival – St Columb’s Park. Most of the bags were unavailable for comment thanks to the Council’s Cleansing Department, however we did manage to find one lodged in a grating who gave us an interview.

“I won’t lie, it was tough going lik” said former Chill off-licence bag, Nippy McHandle. “Me and thousands of my comrades were just ripped away from closest friends and forced to be ‘booze mules’ for an army of semi-naked muckers wearing Gino’s cargo shorts, Primark flip flops and sunglasses from B&M Bargains. I was forced to carry two 3-litre bottles of Strongbow and a bottle of blackcurrant Mi-Wadi FFS.  My fuckin arse is killing me – and wan of me loops broke.”

“Tight hoors wouldn’t even pay another 5p for reinforcements either. Then they just toss me away lik I meant feck all to them! Wouldn’t even boke in me or nothing!  I feel used!” he added.

Brooke Park staff were keen to stress that their park was undergoing a huge overhaul at the moment, and that most of the facility was unavailable at present for the traditional pastime of ‘acting the ballix’.  “Sadly most areas of the park are fenced off now” admitted Brooke Park warden, Barney Flymo. “So at the minute, we’re only really getting people doing boring things like jogging, walking their dog or sitting about reading books, newspapers and shite.”

“However we’ll be back in business soon, and the next time the sun shines we hope people will remember the years of service Brooke Park put in as the town’s leading venue for being shite at football and getting sun-stroke whilst pished!”

In later developments, a ‘time capsule’ found at the park during digging work gave staff a glimmer of hope that their luck was turning.  However upon opening, it was revealed to be a 140 year old set of architects blueprints for a £15m footbridge across the Foyle.