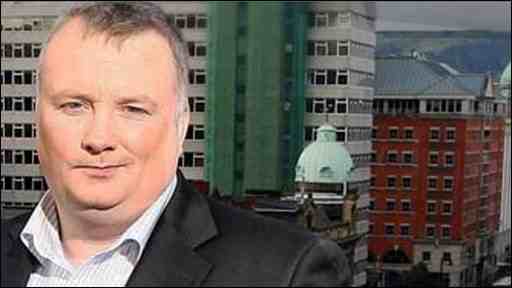 The Northern Ireland situation ‘is over’ and everyone ‘actually gets along grand’ claims an undercover Ofcom investigator, who has uncovered shocking new evidence that the apparent tensions between Protestants and Catholics in Northern Ireland is now entirely perpetuated by a team of voice actors, who phone into a local radio show to make bigoted rants.

Proof first came to light 18 months ago when several audio-auditors noticed striking similarities in the speech patterns of angry phone-in guests on The Stephen Nolan Show, finding that many of the irate guests were actually the same people, assuming a range of stereotypical Ulster identities.

“All the evidence we’ve found supports the theory that a small group of actors have simply been redialing the show and putting on a variety of Cullybackey, Glengormley and Castlederg accents – in a bid to keep the show ratings up” said Alastair Dineen of Ofcom.

“Most shockingly, this has been going on for years according to our analysis, and there is evidence that the BBC and local media have been in on it from the start” he added.

We tracked down one of the voice actors responsible, who anonymously told us that he no longer worked for the show. “I used to phone the show about 3-4 times a day at the height of the flag parades.” he admitted. “It was a real cushy number. Just phone in, be angry, and totally disagree with the viewpoint of the other person. My favorite character was an angry Belfast taxi man called Big Jim.”

“Most of the time I didn’t know if I was going to be a Prod or a Taig when I got through. As long as I strongly disagreed with the other viewpoint and recited a load of oul rhetoric you’ve heard countless times before – then the producers were happy, and I got paid!”

“At least back then there was actually someone else to argue with!.” he added wistfully.

Further investigations into the practice unearthed evidence that many of the voice actors recently quit, because they got tired of repeating the same thing over and over again.

“Yeah we got bored saying the same oul stuff and being angry with each other in the end up. Everyone just wanted to get along. Those that left the show are all good friends now. We just get on with life and go about our day-to-day lives, like normal people.”

Due to these staff shortages, the remaining voice actors left on the show must now assume both sides in current radio debates, loudly throwing their voice around in an effort to contradict themselves.

This revelation has angered both Sinn Fein and the DUP, who were quick to issue a joint-statement that contradicting themselves was their job – shortly before retracting it and apologising.