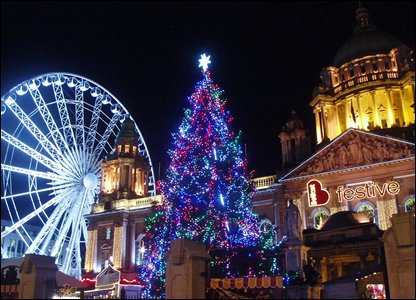 Northern Ireland became the laughing stock of the world again over the weekend, as die-hard Christmas fans violently protested that Belfast’s Christmas tree was no longer going to be on display for 365 days of the year.

Christmas trees, which are only erected over the winter festive season in the rest of the world, have been an all year round fixture at Belfast City Hall for many years. However a recent democratic vote on the matter, has seen Belfast follow in the footsteps of Lapland, to adopt the same Christmas tree policy as Santa himself. However some Christmas fans think it’s still an affront.

“It’s an utter disgrace” said loyal Christmas lover Billy Knuckleson, “I am Christmas through-and-through, and I demand that my insecurities on the matter are reassured at all times by the year round display of a Christmas tree at City Hall!”

When we explained that not even Santa puts up his Christmas tree all year round, and that Belfast is now equal to the North Pole on the matter of erecting a tree, he seemed unmoved.

“I don’t care for your rational and reasoned mumbo jumbo” he barked. “It’s nice to be equal to our beloved Lapland naturally… but we expect to be MORE equal.”

“God Save Santa!!” he shouted finally before rejoining a group of men burning a Christmas tree to make their point about how we should respect Christmas trees.

Santa, who was watching it unfold on TV at his winter palace at the North Pole, was said to be disgusted at the sight of spides rioting in the name of Christmas.

“These rioters don’t represent the good name of the Christmas empire I reign over!” he said.

“Plus, If they have a valid point, why do they have their Christmas scarves covering their faces?” he asked one of his elves.