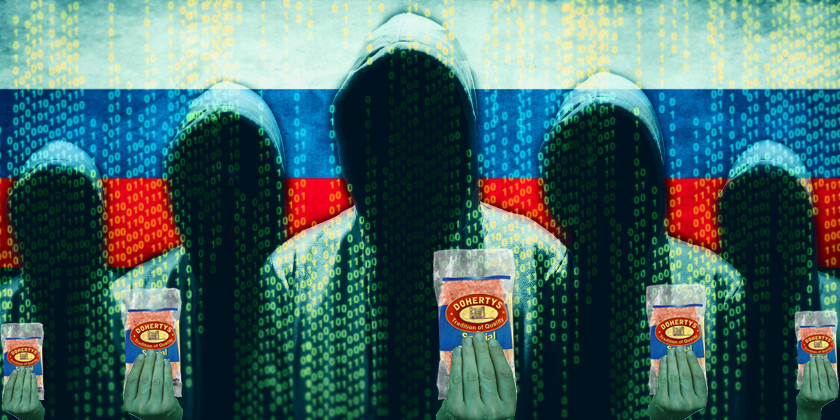 After manipulating the recent US elections, Russian cyber terrorists have accomplished an even meatier technological feat according to intelligence sources, and have infiltrated the Doherty’s Meats supercomputer in Pennyburn Industrial Estate.

The powerful server houses the mysterious ingredients for Doherty’s Special Mince, a closely guarded state-secret which only three living people in the world ever know at any one time.

“It’s a whole handlin” confirmed Doherty’s spokesman, Philip Mignon. “I got a dodgy email from some boy in Moscow threatening to reveal the ingredients of our Special Mince to the entire world if we didn’t meet their demands!”

“And they are demanding Special Mince!” he added.

Delegates at the Russian Embassy in Foyle Street refused to be drawn on the allegations, but did confirm that KGB operatives living in Cold War Derry told legendary tales of how much nicer Beef Goulash was when made with Special Mince.

However the authenticity of the “hack” has since been called into question by 32 year old I.T. whizz, Keyboard Devlin, who according to his Ma, ‘does something with computers in a place down near Springtown somewhere’.

“Aye it’s a loada shite!” he told us. “I traced they IP to a Cash & Carry place just around the corner from Doherty’s!”

It has since emerged that the email was actually from Musgrave, not Moscow, and that they were just looking to order a load of Special Mince.

No one in Derry could tell what was in Special Mince at the time of going to press, however everyone said they’d take a half pound of it if it was going.

In sad related news, Doherty’s employee Philip Mignon was later admitted to Specsavers in Ferryquay Street for an emergency 2-for-1 lens treatment.