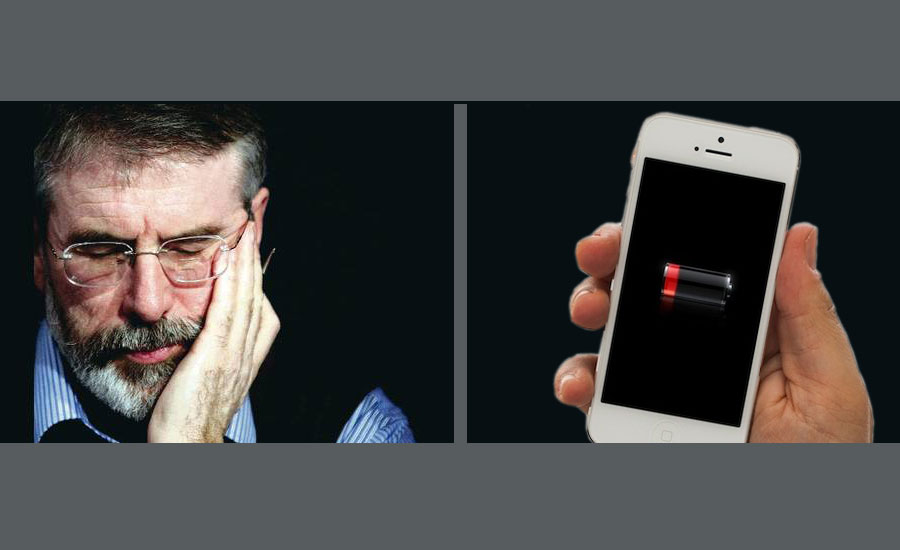 Adams, reportedly entered the station on Thursday evening with a full 98% battery, but claims he left Antrim last night, with his phone teetering on the brink of imminent failure – after PSNI officers refused, for an entire four days, to lend him a USB cable.

An emergency Sinn Fein delegation entered the prison on Saturday evening, as Adams was anxiously watching his battery indicator creep towards the dreaded 20% ‘red alert’, armed with a plethora of energy saving tips and tricks.

Sinn Fein’s top barrister, Conchobhar O’Kelly, advised Adams to shut down all his unused apps, to disable his Wifi and BlueTooth, and even to reduce his screen brightness, all in a desperate effort to keep the Sinn Fein supremo up and running.

His last 24 hours of incarceration were the most gruelling by all accounts, as the Sinn Fein president was forced to brutally ration his Snapchat and WhatsApp usage, between long bouts of self-inflicted ‘Airplane Mode’.

Upon his release, it is understood his battery was still operating on an incredulously low 1% power, with an anxious and drawn looking Adams afraid to even unlock the screen for fear of imminent shut down.

Sinn Fein, who immediately rushed Adams to a nearby car equipped with the latest in cigarette-lighter charging technology, have hit out at authorities and promised to seek justice for the travesty, claiming ‘dark forces’ within the PSNI were behind it.