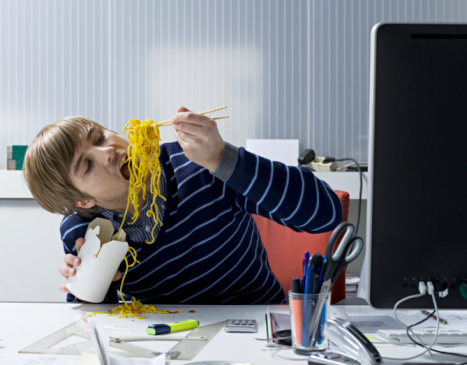 A local office worker had his lunch completely ruined yesterday, after the entire workforce of his company failed to ask him what he was eating during his daily one-hour reprieve from staring at a computer.

Jason Moore, 25 from Cookstown, said he could usually always depend on people in his office to ask him a various mix of intrusive mundane questions about his packed lunch, however yesterday he failed to receive even a single one.

Speaking of the ordeal, Jason told us. “Usually a number of people walk by me just as I’m in the process of stuffing something in my mouth and ask things like ‘What’s that you’re having?’, ‘Did you make that yourself?’ ‘Does that keep long in the fridge?’, that sort of thing. But yesterday, nothing! Not a single question!”

“No-one even commented that it smelled nice!” he lamented. “I just sat there thinking, what the hell is wrong with these people! Surely someone will pipe up any second…”

Unfortunately for Jason his worry quickly became reality as he swallowed the last bit of sauce covered pasta, teary eyed that cuisine inquisitors were not forthcoming.

“It was awful. I brought in some left over bolognaise from my dinner the night before, in a nice Tupperware container. I cooked it myself and really put some effort in. The conversational potential was immense, but not a single person took interest, not even the person waiting to use the microwave after me. I was heart broken.”

Jason, who has been working in the same office for three years now, told PD News that he hopes never to relive the experience ever again, and that he was looking forward to getting back to the normality of routinely answering dreary questions about his dietary intake every day, for a long, long time.

“Personally, I find it there is nothing better than answering a series of monotonous questions instead of just as you are about to put food in your mouth.” he said excitedly.

“I seen Tracey in accounts taking a slight interest in my direction at this morning as I was putting some humous and carrot batons on the middle shelf of the fridge beside her cous-cous, so I’m feeling positive about today. “ he continued.

“And if that doesn’t get any interest, then the homemade soup will definitely do it” he winked. “One whiff of that badboy and questions will be flying I’m sure. Bring it on!”

Have you had a traumatic experience at the workplace? Email PD News today and let us share your story with the world.