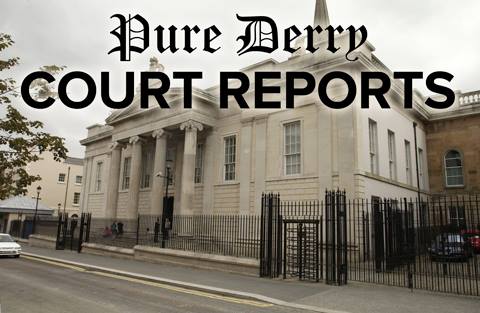 Drama unfolded at Derry Courthouse during the week, as the legal system dealt with a backlog of criminal cases from across the festive period. Pure Derry were at court to bring you the latest.

~ Fifty eight year old mother of four, Baguetta O’Hara, was first in front of magistrates, as the court heard how she had shamelessly and repeatedly distributed Christmas presents to her friends and family in gift-bags she’d already received her own presents in. This growing black-market trend has seen thousands of illegitimate bags shared back-and-forth between families across the city, sometimes for years on end. Sending her down, the court sentenced Mrs O’Hara to 120 hours community service work on the Price-Check desk in Poundland.

~ Pennyburn born Soandso McLaughlin took long-time Facebook friend Watserface Doherty up for persistent harassment via the social networking site. The plaintiff claims that Mrs Doherty had been sending her requests to play Candy Crush, as often as three times in the one day. As well as sharing vines to her timeline with the heading ‘lol’, plus several counts of starting seriously annoying group chats. District Judge Reginald Legal Filter had no hesitation in imposing a three-month retraining order on Doherty, barring her from being within 100ft of any internet connected device.

~ 29 year old Bluetooth Devlin, was in front of magistrates on Thursday morning, charged with making false promises to friends and family in the build up to Christmas. Devlin admitted openly to the court, that he had made several rose-tinted and optimistic plans to catch up with all his muckers for pints over the holidays, before repeatedly not bothering his hole, because he was either “too fried, hungover or busy watching Home Alone re-runs on TV3”. A jury found him found him unanimously guilty, sentencing him to indefinite community service hours, eating all the leftover coffee creams in sweet tins across Creggan.

~ A Galliagh man was sentenced shortly after Mr Devlin, for ruining a long standing staple comedy gag, during the New Year’s Day swim at Fahan beach. Beezer McCourt took to the sea in the done to death Borat ‘mankini’, but curiously tailored the outfit with a pair of Primark shorts underneath. The well loved joke, that has been the crutch of many “funny bastards” in the town since 2006, left one eye witness saying “It was a sight for sore eyes and he should rot in jail for being a comedy turncoat.”

~ The entire population of Cornshell Fields were last on the docket last on Friday, charged with putting up their Christmas decorations far too early. Speaking to a crowded courthouse, Judge Reinhold had to twice silence cries of ‘She fuckin started it!’ from angry residents, who have been caught in a jealous spiral of tit-for-tat decoration hanging for several years now. The PSNI confirmed that a checkpoint would be in operation at the entrance to the estate this year, confiscating any Christmas merchandise until 5th December.