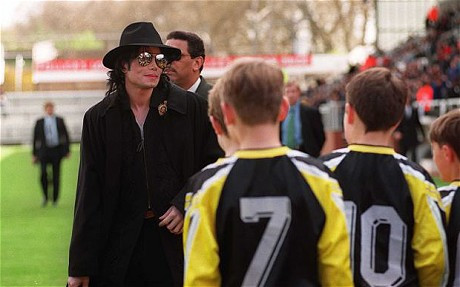 Michael Jackson’s new album, which is set to be released on May 13th entitled “Xscape” – features eight never before heard tracks, six of which have been revealed to be love ballads about Young Boys.

The love songs were written and recorded by Michael in 2005 and include titles such as “Play in the hole”, “Tight at the Back” and “Young Boy, You’re a Keeper” which describes in detail how Michael became enthralled with the Young Boys.

The songs are layered with emotion with lustful lyrics poetically reciting his pain of living so far away from his hearts desires. Close friends of Michael are calling it the most intimate & personal work he ever recorded.

As expected the songs are set to cause controversy among Michael’s critics, particularly fans of Barclays Premier League outfit, Fulham FC, with whom he was long associated. Indeed Fulham fans will find it hard to accept the news that Michael actually supported Switzerland based football team BSC Young Boys, and not their beloved Cottagers.

“Thank God we took down that statue of him otherwise it would have been torn down today” said an irrate supporter today at Craven Cottage.

Michael is said to have become a huge secret fan of BSC Young Boys and their history when he visited Switzerland some years ago on tour. It is understood he felt their yellow and black kit was more glamorous than the dull white & black of Fulham – but he never had the heart to tell Mohamed Al-Fayed whilst he was alive.

“Tight at the Back” is a tribute to the defensive prowess of their 1986 Swiss Super League winning team, while “Playing in the Hole” is about Michael’s favourite playmaker, Hakin Yakin. The album ends with toe tapping pop anthem “Young Boy, You’re a Keeper”, which he penned about the club’s legendary shot-stopper Walter Eich, who starred in the team from 1947 – 1960.

The album is set to bring a wave of new international support to the Swiss club, with current manager Uli Forte excited at the potential revenue, which will help their youth system produce future Young Boys superstars – something Michael was reportedly keen to be a part of.