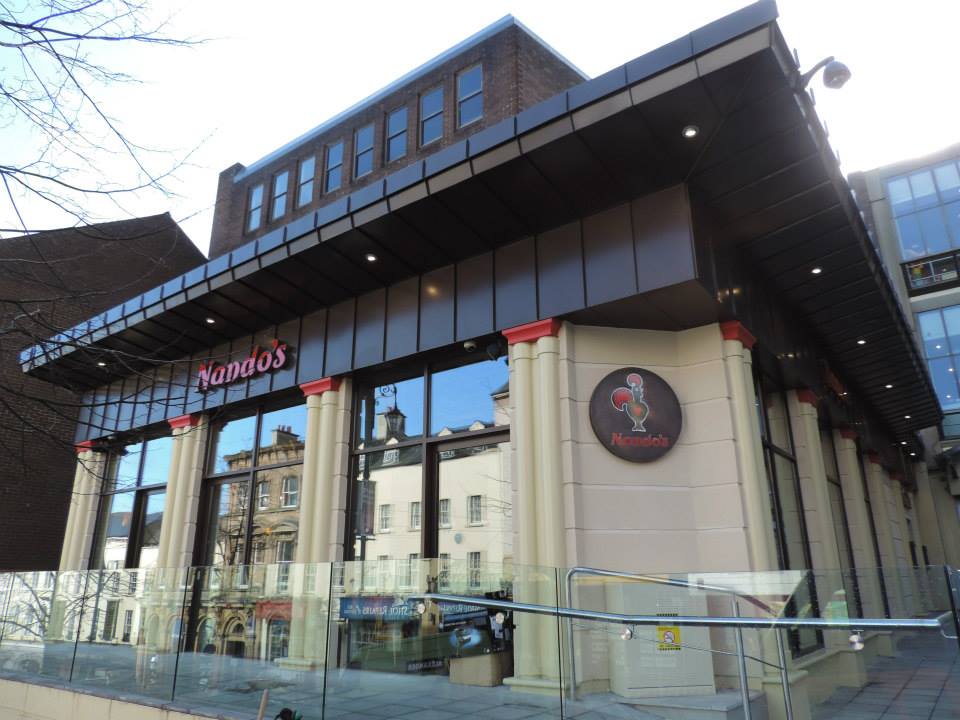 Local drinkers have commended chain restaurant Nandos, after plans revealed that their new Derry restaurant, at the Richmond Centre entrance, has been expertly crafted to allow for more secluded late night street pissing on Shipquay Street.

The new building, which protrudes from Derry’s premier 80s themed shopping centre, will provide much needed cover for those caught short when stumbling to the next drinking hole.

Local architect Stencil McLaughlin, who designed the building soon to be popular amongst people who like eating chicken, said it took him many nights of pissing in different parts of Derry’s streets to come up with a concept that everyone could take advantage of.

The achievement has been praised by the thousands of urban urination fans throughout the city – for its safety-feature curvature walls, which prevent splash back from even the most erratic of power pishes.

Along with the new modern curves, the building offers a refuge away from the prying eyes of the PSNI, who often sit outside Sugar keeping a watchful eye on the hundreds of vulnerable local girls in short skirts and high heels, to keep them safe from pervs.

A Richmond Centre spokesperson said they are delighted they could offer a new service in the town but are worried about how their shutters and windows will be washed in future.

Capitalising quickly on the emerging opportunity, Downey’s immediately announced a new Windowlene flavoured WKD line, which they hope will encourage drinkers to take an active role in keeping the city clean – and smear free.

The new eatery is due to open this week by the Mayor of Derry, who will be the first to christen the new restaurant, in an opportunity he is relishing. Reports suggest that his practice runs behind the Guildhall have been particularly impressive, with one witness claiming that he even managed to spell out his initials on one occasion.

Nandos have since come under criticism by local food lovers, after it was revealed that their new restaurant would oddly not be offering 33% off normal prices. Further revelations that none of their seven varieties of sauce contained neither mayonnaise or sweet chilli have been met with a similar scathing response.