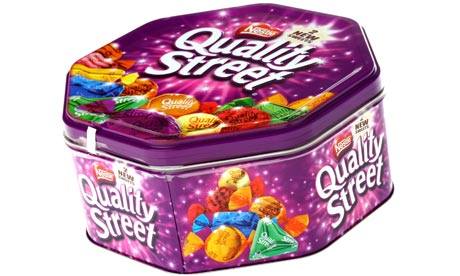 After spending hundreds of pounds buying in food to last the family over Christmas, local mammy Teacake O’Hagan told Pure Derry today, that she expects the last tin of Quality Street in her house to be located ‘sometime in April’ – admitting that she’d found a ‘cracker hiding place’ this year in her Brandwell home.

‘Aye, I found a box of Tunnocks tea-cakes in the electric cupboard last March.’ confessed her son, 22 year old Jampuff. ‘And a few weeks later a tin of Minature Heroes turned up in my Da’s sockdrawer FFS.’

‘I don’t know why she just doesn’t put everything in a cupboard so we can actually eat them at Christmas’ he said with a sigh, as he wearily looked for box of After Eights under the sink.

The current world record for stashing Christmas munchies around a house, is held by Marlborough Terrace pensioner Sadie Overlock-Doherty-McCrystall, who’s husband Jim has been searching for a tin of Highland Shortbread biscuits she bought in for Christmas in 1972.

It is widely understood that, even as you read this, hundreds of men across the town are searching in hot-presses, wardrobes and linen closets, looking for something sweet to go with a cup of tea. It is expected that most will eventually go on to curse their own insistence on keeping empty sweet tins to store crap in, as hopes are universally dashed with the sight of tools, nails and odds-n-ends, where there used to be munchies.

This is Pure Derry, reporting live, from me Ma’s back shed, hot on the trail of a box of coconut snowballs.