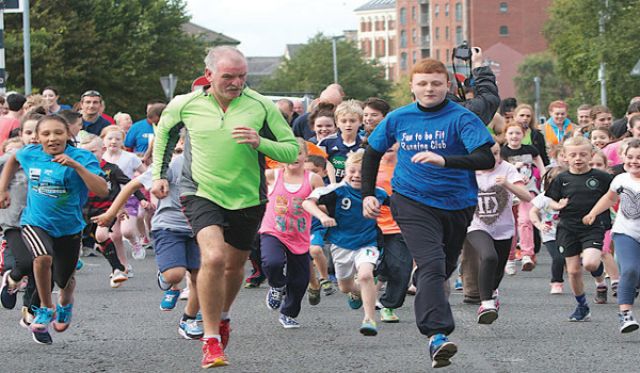 Following the success of the creatively named ‘Jog In The Bog’, Pure Derry has learned that wannabe entrepreneurs across the town are muscling in on the act and setting up rival fitness events with similar crap yet sorta brilliant names.

Lycra Doherty, organiser of ‘Wearing Leggings In Creggan’ told us that the Bogside run had inspired her to get off her arse and setup her own pun-run.  “I think there is plenty of room for more of these events around the city” said the 27 year old part-time taxi queue skipper. “Except maybe inside my leggings… there isn’t a lot of room left in there” she admitted.

Terry Springer, founder of ‘Jumping Over Things In Foyle Springs’ agreed. “At end of the day it’s just a bit of craic. People are getting fit and healthy and having fun. We aren’t doing any harm”. However we would like to remind members that classes for the rest of the week are cancelled whilst we wait for residents to rebuild their garden fences.”

As the trend continues the local council have revealed they have had applications for ‘Doing Your Core In Culmore’, ‘Body Attack In Ballymac’, ‘Medicine Balls Up The Walls’, ‘Drop & Gimme Ten In The Glen’, ‘Kettle Bells In The Wells’ and ‘Doing Tai Bo in Drumahoe’.

Aside from fitness it appears clever business people are also trying to monetise the city’s unfitness too. “Aye we’ve also had registrations for ‘Feeling Rough In Muff’, ‘Sweaty Bokes in Seven Oaks’ and ‘Epic Fails in Gobnascale’.” continued Bag  “It seems you can run a successful business using a load of unfit tossers!”

In other news Roman Abramovich’s Chelsea team still only had 1 point.