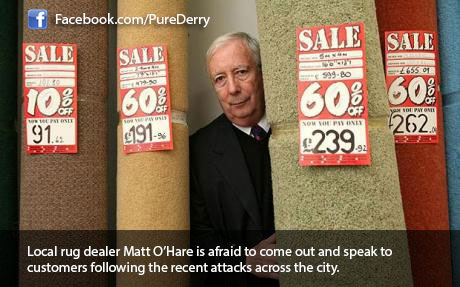 The perils of leaving school in third year were painfully clear again last night, as members of the newly formed Financial IRA, mistakenly went on an anti-narcotics rampage following a minor typo in a text message to operatives.

The group, which claims to be against all forms of illegal & harmful substances being traded on the streets of Derry (excluding gunpowder, semtex and duty-free tobacco), shot and injured three known ‘Rug Dealers’ yesterday in attacks around the city.

One of the victims, who was spotted selling rugs door-to-door in Carnhill, was ruthlessly gunned down as he showed a sample of his axminister double weave to kids outside the local secondary school.

Two other men, who worked at carpet showrooms in the Pennyburn and Crescent Link areas of the city, were fired upon as they opened up their respective stores early yesterday morning.

“Take that ya Rug Dealing Bastard!!” was the battle cry of one of the balaclava wearing drive-by terrorists, who then sped off to exit Crescent Link, only to join a long tailback of cars waiting patiently to exit the retail park.

In a stroke of luck for the men, police were slow to arrive to scene, having responded to the other shooting incidents, allowing his accomplice ample time to nip into nearby Subway for a bite to eat before they made off.

Detectives have now narrowed their suspect list to local men with two eyes. who like southwest sauce, extra jalapenos and hearty Italian bread.

Rug dealers across the city are now afraid to open their doors for business, leaving the public no choice but to buy cheap laminate wooden flooring.

“They’re just a bunch of fucking planks” said one local man we stopped outside Maiden Wood. “But this laminate flooring stuff on the other hand is pretty good value!”