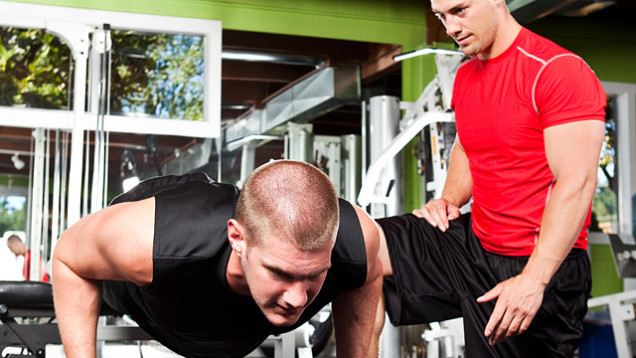 Fair employment chiefs were left red-faced this morning, after it emerged that scores of career-minded locals had uncovered a secret social media loophole, which instantly allows anyone to become a Personal Trainer. It is now understood that countless dozens of people across the town have exploited the controversial clause, which enables normal people to become fitness gurus, simply by adding the letters ‘PT’ to their name on Facebook.

Bonzo McCourt PT, who until yesterday was a minimum-wage nightshift worker in Tesco, was delighted with the discovery, and has already signed fifteen people up to his new ‘Early Bootcamp’ class, starting tomorrow.

“We’ll be meeting up at Quayside Shopping Centre at 5.00am” said the 24 year old entrepreneur. ”From there we’ll head into our purpose built training facility, where people will be put through an grueling hour of intense box lifting, pallet truck pushing, high-speed shelf stacking, carton hand-balling and garbage compacting.”

These are sentiments echoed by fellow fitness expert Navel McCormac PT, who until last week had been working as mere breakdown repair mechanic. His new group exercise ‘Car-Push Bootcamp’ has brought in dozens of clients for his new venture, as scores of lycra-clad locals have reached their weight-loss goals, in a true test of man against machine.

“Personal training is one of the world’s oldest professions” said the 28 year old Adonis. “Not to be confused with prostitution of course …” he chuckled. ”Those charlatans just prey on the weak and insecure for financial gain LOL.”

“Sure, if it hadn’t been for PT’s, then who would have invented exercise?” he added gleefully.

Not everyone is so keen with the new outdoor group fitness trend though. One family of Jehovah’s Witnesses contacted us to say they hadn’t left the house in days, for fear of meeting over-enthusiastic PT’s sticking Bootcamp leaflets through their door.

“You’d be a fool to argue that regular exercise and a healthy diet isn’t a good thing for everyone. Of course it is!” said Isaac Marmaduke McLaughlin

“But on the other hand, the next time someone in spandex blocks my cycle path doing split-squats, I’m gonna give them a right boot up the hole!”