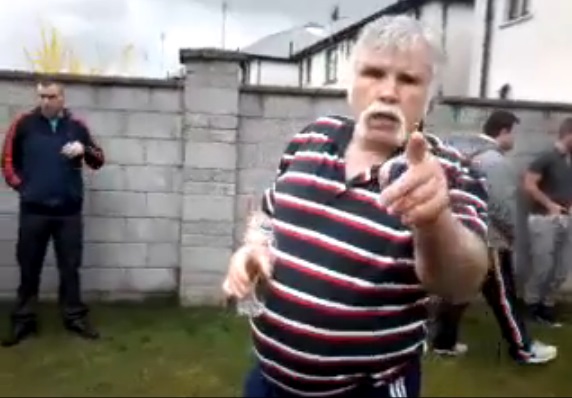 Big Joe Joyce, the patriarch of the infamous Irish travelling family, the Joyces, has today posted a video on YouTube calling out undefeated multi-belt world champion Floyd Mayweather for, as he describes it, “A baitin to laive em shitein inna bucket fer mondhs”

The 15min video stars various members of the Joyce family issuing challenges to other travelling families, in an attempt to schedule a full day of “Baitins” for 1st July. However it’s the Mayweather vs. Joe Joyce bout that has caught the attention of the world media, with Joe goading Mayweather into finding out who the true undefeated champion of the world is.

The self proclaimed ‘King of the Travelers’ is understood to have become jealous at the public admiration for unbeatable Mayweather and his assets – while his own flawless fighting achievements and caravan decorating skills have been frowned upon for years.

Interrupting son Davey, who was ripping a Simey Quinn a new arsehole with a litany of verbal insults, Joe launched into breathless tirade of abuse, labeling Mayweather as a “gud fer nattin hoor” and a “durty rattin cheat”.

The singling out of Mayweather comes as no surprise to Joe’s family, who firmly believe their father is the best fighter Tullyhogue and the world has ever seen. Mr Joyce’s son Davey was confident his father would “Bait Maywedder black an blue, an sure luk at em, me da would only ave te do da blue part. Eel be champion of da wurld an dats dat ye dirty shite ye”

Joe insisted Mayweather wouldn’t have to lift a finger to arrange the bout by having his brother act as referee – while putting the megastar up in a two star caravan complete with freeview. However, the venue is still to be confirmed, with a number of country roads and barn entrances across the country in contention.

Official bare knuckle records show Joe has enjoyed an illustrious career where he has yet to suffer defeat, and all without ever training for a fight. “I drink an ave sex wimme woman is all I do. I don’t need de prepare fer da shower ah shite dat pours outta dem odder families. An ye kin add Maywedder de dat list. Am da best fyiter in da world!”

It’s understood that as part of the deal, should Joe be victorious, his family would be granted the contract to re-tarmac the entrance to Cesar’s Palace in Vegas – and for an episode of CSI to be set around one of his daughters weddings.

The Mayweather camp have yet to respond to the challenge.