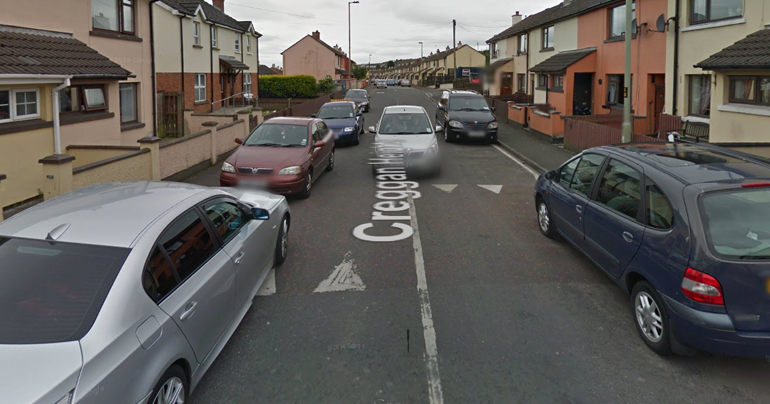 After decades of parking on both sides of the road and leaving barely enough space to drive a photocopy of a Fiat Uno around Circular Drive, a resident of Creggan Heights has unveiled a revolutionary plan to build an area outside his house on which to park his car.

Locals watched in amazement as 32 year old Plimsole McCormac drove his car into his front garden, after his bemused friends helped him knock down part of his front fence.  “I don’t quite get it” admitted neighbour Weetabix Hegarty “I mean, there is just a spare bit of public road outside his house now with no car parked on it, it looks pure weird!”

Should the idea take off with other residents in the area, it will be a huge blow for local taxi-men, after it was recently announced that next years ‘Cheeky Impatient Ignorant Bastard Driver World Championships’ was set to be played in Creggan in the summer of 2016.

“I’ve spent years practicing the art of not waiting my turn, driving on anyway when other cars are coming, refusing to flash the lights and failing to give polite drivers a wee wave of thanks for letting me out” said local taxi man Argos McKeever. “Having enough room to drive two cars past each other in Creggan would put an end to our way of life – and any chance we’d have of winning Gold next year.”

The news comes just days after the announcement of a new ‘Speed Bump Loyalty Card’ scheme for the Creggan estate, which will allow visitors to the area to get 50% discount when replacing their cars suspension system. “I’ve been bouncing up and down with delight ever since I heard about this initiative” said Rosemount resident Mayfair McLaughlin. “I’ve been dropping the wains up to the Cornbeef Tin about three times a week to play football for the last year, and so far I’ve gone through four sets of suspension springs and two exhausts.”

“It was fun at the start like, don’t get me wrong, it was like having wan of them hydraulic cars from Boys in the Hood, but eventually it wears thin. As do you your springs.”

In a recent report out by the Creggan Institute for Economics, it was estimated that a late night drive to the Hellstar bar to get a carryout cos an average of £27.50 in mechanical wear and tear.  A spokesman for the bar contacted Pure Derry to say ” Have ye any odds, hi?”