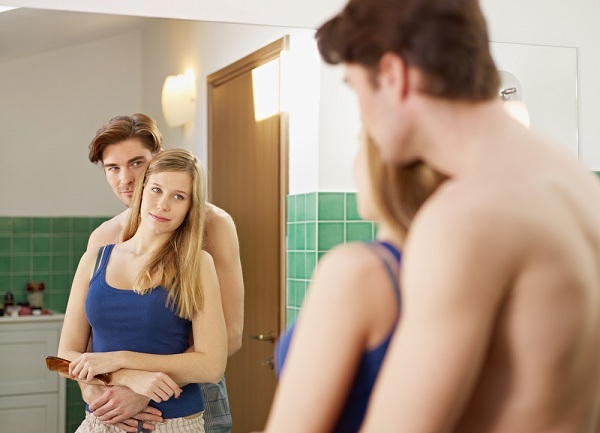 A couple of gym ‘lovers’ from Newtonards have revealed their relationship relies entirely on the use of mirrors.   Richard Moss and Noreen Daly met at their local Fitness First, where they struck up a solid relationship that continues to grow strong.

Richard and Noreen’s flat, from skirting board to ceiling, is covered in mirrors, which is solely the only means that they can communicate with and recognise one another.

“We met at the gym, always talking into mirrors while we worked out and it’s just stayed that way ever since. I wouldn’t know who she is otherwise” said an obviously smitten Richard.

The idea came to the couple when they both arranged to meet for their first date, but didn’t recognise each other until Noreen caught Richard’s reflection in a shop window.

“Oh we were such fools. We both stood looking at one another but didn’t say anything for at least ten minutes. I didn’t know what Richard looked like without seeing him in a mirror so I thought he was just a grotesque weirdo standing near me, and he thought the same of me.

Richard agreed “It was weird seeing her without the means of a mirror, she looked back to front and horrible. I hadn’t a clue who she was”

The couple embraced DIY and filled their flat with mirrors to keep the relationship intact, which is going from strength to strength, much like their bodies in the gym.

Noreen gushed –“I couldn’t have asked for a better partner, although he needs to brush up on his hand-eye coordination, the fucker has scalded me a few times misjudging handing me my tea.”