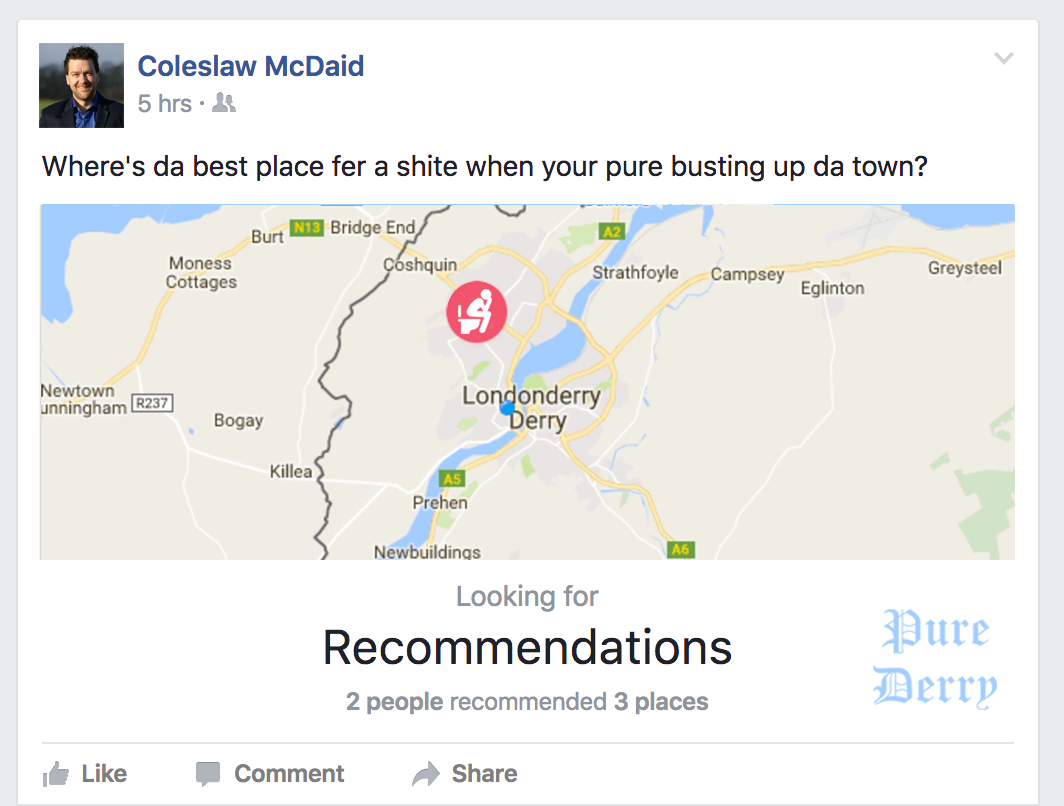 Following the addition of a new feature which allows people who haven’t figured out how to Google stuff to get others to do it for them, Facebook supremo Mark Zuckerberg today admitted that his head is already ‘pure fried’ with the update.

“In hindsight we didn’t really think this one through!” he told us earlier. “My newsfeed is now chock full of dickwads asking stupid questions, like ‘Where de ye get an iPhone fixed cheap?’, ‘Duz any1 know if ders any barbers open on Sundays?’ or ‘Wats la number fer da out-ov-hours dokter?’.

“It would melt ye hi!” he admitted with a weary sigh.

However despite dividing opinion in Silicon Valley, Derry natives appear to have taken the new feature to their hearts, and have been excitedly using it to discover the many hidden delights of our city, asking such deft and incisive questions as:

– Where’s da best place de get coal?
– Who do ye reckon does the best curry sauce?
– What frequency is Q102 on?
– Do any taxis deliver drink at 3am?
– Does anyone know the phone number for Busty’s?
– What time is the Ten O’Clock news on at da night?

Indeed such has been the success of the feature, that the PSNI have issued a statement urging restraint when using it.

“We know you are all keen to discover great new things” said officer Jim Bebo from the Social Media Safety Division. “But it’s probably not meant to be used to ask ‘Any parties happening hi?’ or ‘Who has the best E’s in Strathfoyle?’.”

One local man, 27 year old retired painter & decorator, Marmaduke McLaughlin from Creggan has already been arrested for abusing the service, and is now due to appear in court charge with four counts of being a wile man and three separate counts of causing a whole handlebars.