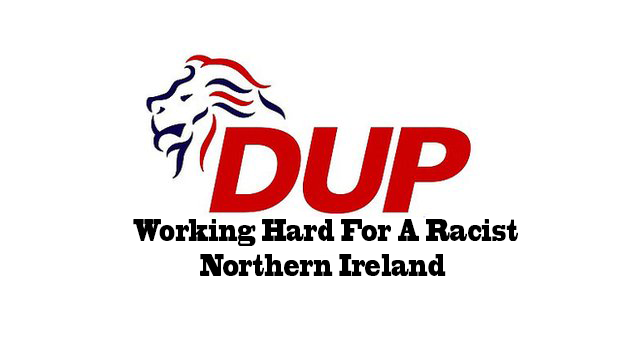 DUP Leader Peter Robinson today revealed that plans for Northern Ireland to become the ‘number one place for racism in the UK’, are already well underway.  With the Provinces former ‘ism’ passion,  terrorism,  taking a back seat in recent years,  DUP members have been forced to innovate and find new things to whinge and complain about.

Indeed, the DUP leader recently expressed his disdain for the lack of daily threats from the IRA and other anti-social groups, as playing a big part in the decision. It is reported that he privately wants to have a mind so narrow, that even a DUP policy wouldn’t fit through it.

Speaking at Stormont today, Mr Robinson said “Sadly the heyday of Ulster politics, of dealing with the constant threat of terrorism, and people dying, and bombs and all that stuff, is now over.” he said glumly.  “It’s been a long difficult road, and we’ve lost our way at times, but now we’ve found new purpose!  Not only is Ulster NEVER going to Irish, it will also never be Pakistani, Indian, Polish, Nigerian, Czech, Latvian or Sherarararaian either!” he declared.

The evidence on this weeks Nolan Show witnessed some audience members were prepared to get behind the radical new proposal, with many clapping like disabled sea-lions at every bigoted outburst.

“The flag protests were getting old hat, and we needed a new talking point. So I decided, along with Pastor James McConnell, that racism was the road to take, and that Muslims were the perfect group to attack first.”

“Mostly because there aren’t that many in N.Ireland to start with, I’d likely be safe from any physical harm.” he said courageously.

The DUP is said to be in full support of their leaders new policy and will soon begin a house-to-house campaign of abusing foreign looking people who answer the door, with viscous verbal insults.  In order to keep costs down for taxpayers though, the DUP have told awaiting press that campaigners have to limit their racist abuse to 2 minute per household.

“We are a fair party, and want to welcome all newcomers to NI equally, so no matter what colour your skin is, or where your are originally from, everyone can expect exactly the same allotted interval of racist abuse.” exclaimed Mr Robinson.

“Even Muslims!” he was quick to stress.

As part of the campaign, those going door-to-door will also be handing out booklets of popular racist phrases (reportedly signed copies by Peter Robinson) to absolutely everyone in Northern ireland’s white, DUP voting, protestant community.  The full list of slurs will also be available on the new DUP website, www.bringracismhome.com, for people to download at home.

Peter Robinson ended his speech by condemning the firebomb attack on the Everglades Hotel in Derry/Londonderry last night, saying that “Terrorism has had it’s day.  These mindless attacks need to end.  It’s time for racism shine through in 2014!”

Meanwhile, Stephen Nolan is said to be on the lookout for an “Islamic sounding lad” to join his ever growing cast of voice actors who phone into the show to stir shite.