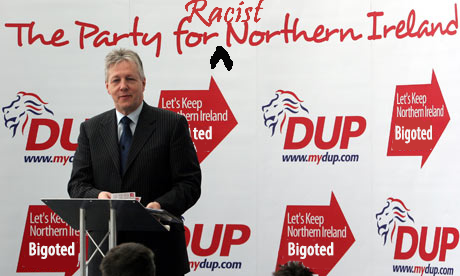 The DUP today spoke of their ‘sheer horror’ upon seeing banners erected outside a house in east Belfast voicing neighbour’s disapproval of a Nigerian man due to move into the area.

Peter Robinson spoke of his revulsion at the artist’s penmanship, calling it ‘disgusting, disrespectful, and not something a racist Northern Ireland can be proud of’

Mr Robinson has been spear heading a campaign to install Northern Ireland as the racist capital of Europe after attacking the Muslim community, feels let down by the locals of Glenluce Drive for not delivering abuse in a concise well written manner. 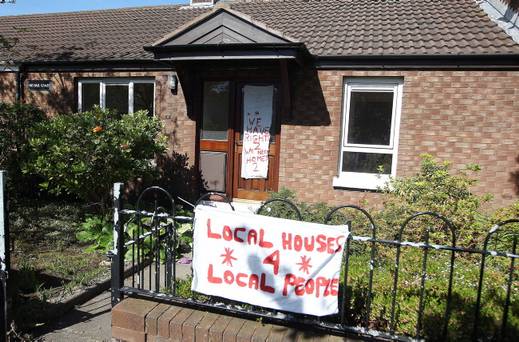 Speaking at Stormont today, Mr Robinson said “First of all the colour scheme is completely off, red writing on a white canvas. People need to colour code their racist opinions with the shade of their target, and in this case a black marker or paint would have been perfect”

The incident has forced the DUP to hold ‘Racist Calligraphy Classes’ at their east Belfast headquarters, hoping to teach local bigots how to word narrow minded abuse in the best way possible.

Sources have confirmed Peter Robinson will personally visit the area later today to remove the abusive banner to erect an improved version written and created by himself, while also offering to give up 10 minutes of his lunch to find and verbally abuse the affected party, Michael Abiona.

A number of locals from Glenluce Drive who helped decide the slogan ‘Our Local Homes For Local People’ defended their banner though, saying they were ‘proud of their handiwork’, with many admitting they had posted the pictures on Facebook for friends and family working abroad in Australia and America to see.