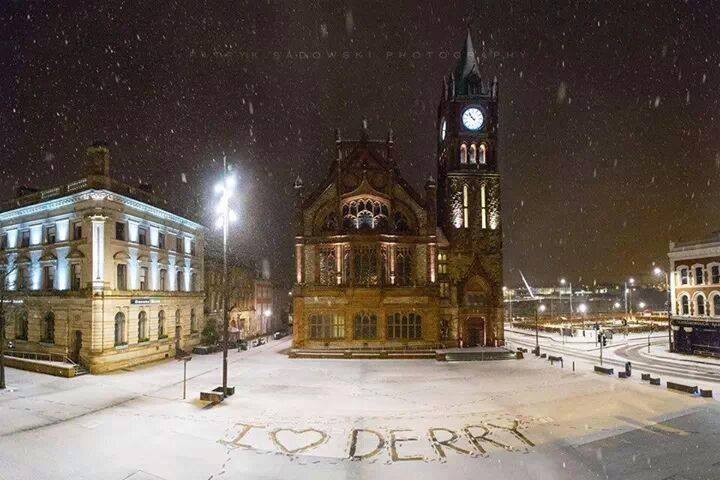 The entire population of Derry was over the moon this week, after someone in Derry took a smashing picture of Derry, before sharing it with loads of Derry people – all of whom reportedly love Derry.

After painstakingly writing ‘I HEART DERRY’ in the snow on Derry’s Guildhall square, the mystery Derry photographer made their way to Derry’s walls with a camera reputedly bought in Derry, before taking a magical shot of the Derry landmark, for all of Derry to enjoy.

‘Love this photo’ said everyone from Derry on Facebook shortly before feeling proud enough to be from Derry that they made it their cover photo.

Even the snow on the ground was filled with pride at the photo of Derry, with all flakes in the shot unanimously agreeing that Derry people were the soundest, most friendliest, best craic people that they’d ever had the pleasure of freezing the balls off.

Indeed a snowman built from the snow was so delighted to become an instant citizen of Derry, that he immediately developed a heavy drinking problem, put in a whiplash claim and went up the town in the snow, wearing nothing but a tshirt.

Derry’s Peace Bridge, so often the headline act in lovely photos of Derry, said he was delighted with the Guildhall’s new popularity, despite only playing a cameo supporting role in the background of the shot.

However sources close to the bridge claim he is actually ‘pure raging’, and has been firing dirty looks at the historic clock-tower all week.