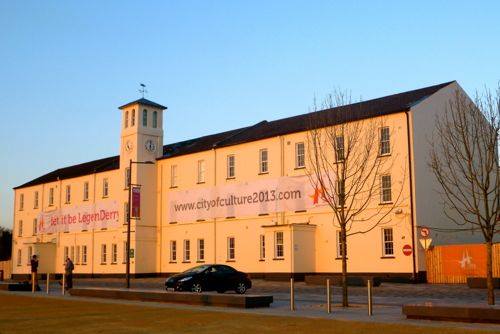 Derry people made the unusual stance of complaining online this week, following the shocking discovery that the space-time continuum would continue to operate as normal, despite the city winning the 2013 City of Culture.

Citizens were outraged to learn in the local newspapers on Tuesday, that 2013, which is understood to be part of a potentially infinite sequence of numbers, is due to be replaced by 2014, when the calendar reaches midnight on the 31st December.

Sources close to the number, confirmed this morning, that it had no choice but to increment by one when this happened, as local mathematicians verified that 1 plus 2013 did in fact equal 2014.

The news has shook the town to its core, in a week in which the temporary ‘Venue’ facility, used throughout 2013 to showcase live events, was revealed not to be permanent. Taking to the internet to complain about the shock, literally everyone gave off, despite the fact that private investors weren’t interested in pitching for the facility, which was pitched in late 2012, on pitches at the back of Ebrington.

It is understood that it will now be dismantled in January 2014, in a joint effort by the Creggan and Ballymac Scout groups, who will be responsible for digging out all the ground pegs, folding all the poles, and ensuring that everything folds neatly back into the original carry-bag.

As news of the disaster broke, a new Facebook campaign page, ‘Another 2013’ was understood to be quickly gaining thousands of followers today, as they outlined their manifesto to fight the laws of relativity and physics, and bring Derry firmly back to the start of 2013, for another crack at the year that was, keeping Derry stuck firmly in the past.

In a rare show of unity, both Loyalists and Dissident Republicans come out in support of the idea.

The Turner Prize, a world-renowned showcase of innovative art installations, remained tight-lipped on news that the Ebrington barracks were earmarked to become unimaginative office installations in the near future.

‘This idea pisses all over the legacy of the City of Culture at Ebrington’ remarked one disgruntled local.

‘Or at least, it would do, if there was anywhere to actually take a piss over there’ he added.