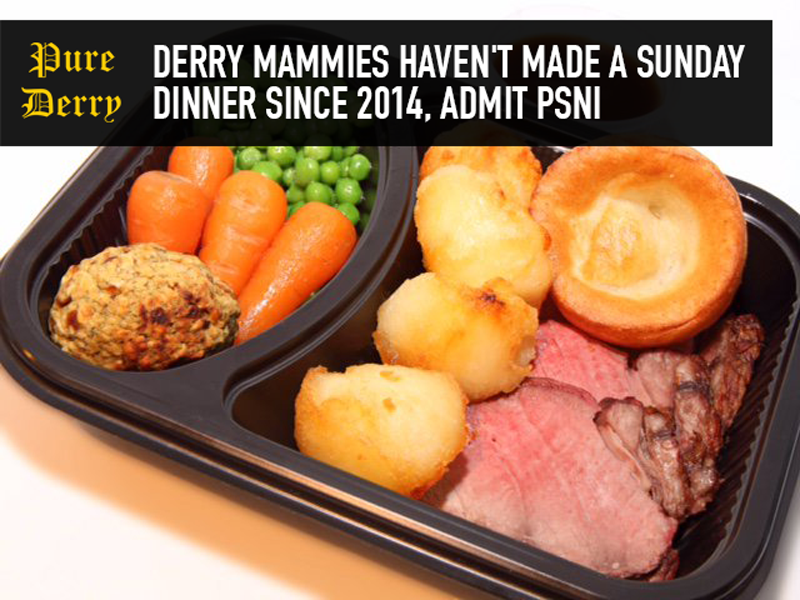 Following a huge surge in the popularity of eating stuff someone else cooked and bucked into a black plastic container, the PSNI today revealed that most Derry mammies haven’t made a Sunday dinner in 3 almost years.

“Our data indicates that Derry wans are still optimistically buying chickens and spuds on a Saturday!” revealed officer Don Munchin from the PSNI’s Nutritional Enforcement Division. “However come Sunday they simply don’t bother their hole actually cooking them!”

“Often because they couldn’t be arsed” he continued “but mostly cos they are pure dying from the night before and the thought of sticking their hand up a chickens hole makes them want to boke!”

Local mammy Philomena Gravyboat reluctantly agreed. “I’ve been sending down to Norrby’s now for years instead of cooking! Mainly cos I couldn’t be arsed doing dishes, but also cos if you wash out the container afterwards with hot water and Fairy liquid ye get another few go’s out of it!!”

However it’s not just our love of takeaway roast dinners that are putting Derry’s rich Sunday cooking heritage in jeopardy.

“Sadly our ambulance service can’t cope with the high demand, but thankfully City Cabs are on hand to make sure everyone can the ‘cure’ they need at recognised treatment centre’s such as Badgers, the Magnet, the Blackbird or right here in the Bentley” he explained, as he caught the attention of a passing waitress.