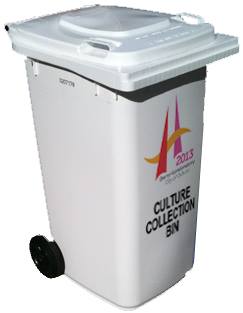 The council this morning began delivering 30,000 ‘Culture Collection Bins’ to homes across the North-West, as 2013 drew to an unspectacular close.

Residents are advised that the new ‘white bins’ will be collected every Thursday in January, until all the culture in town has been rounded up and sent back to a recycling centre on the outskirts of Leeds.

Reports that the culture would simply be going to landfill were dismissed as ‘ridiculous’, especially considering no precedent existed for such under-handed action in recent history.

‘So proud of our new bin!’ said local resident Scratchcard McCloskey as it was delivered this morning.