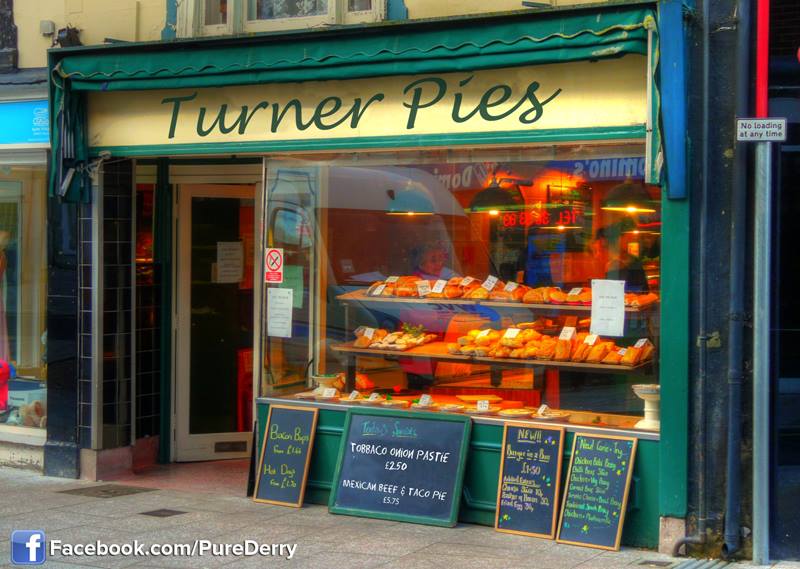 A local pie shop has appealed to Derry City Council, in an effort to understand why tourists keep gathering outside their store and gawking in their window – sometimes for hours on end.

Turner Pies, on Waterside’s Clooney Terrace, told Pure Derry today, that for the past few weeks, they are at a complete loss as to why hundreds of eccentric middleclass people, have been wandering in and out of their shop, admiring their delicious selection of baked goods, and quietly whispering about the meaning of the work.

“I’ve just about had enough” said Dee Turner, proprietor of Turner Pies. “The next time a group of English people come in here to stand gawking at our window display whilst rubbing their chin, I’m gonna beat them up the bake with a Cornish pastie. No pun intended lik.”

“It wouldn’t be so bad if they actually bought something” he continued. “But oh no…. these weirdos just gawk at one shelf for ages, then move on to the next… and do it all over again. I haven’t made a single sale!!”

Further lamenting on his new frustratingly frugal customers, Mr Turner went on “But then again, I overheard one of them last week valuing our sausage roll ‘installation’ at £2.5 million. So I dunno where they are getting their information from!”

“However sachets of brown sauce are 10p each…” he said finally.

Local traffic warden Bill Carson-Rhodes was also bemused at the phenomenon. “Aye, tourists ask me all the time where Turner Pies is. I’m happy to direct them lik, don’t get me wrong, but I really don’t understand what all the fuss is about. “

“Where did you say you were from again? Poor Derry? What’s that? Sorry, you’ll have to speak up son.”