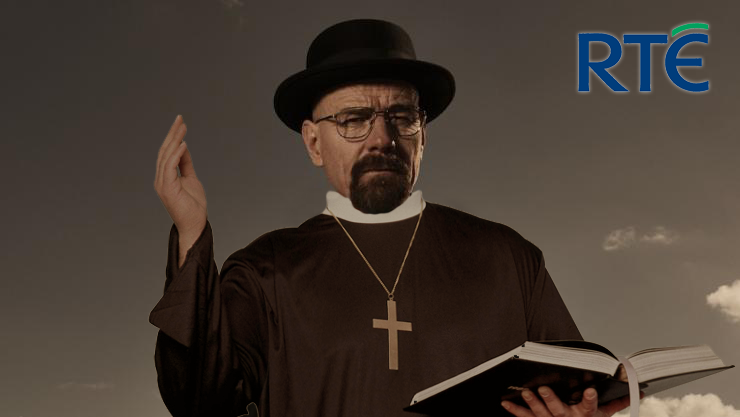 RTE today confirmed that critically acclaimed ‘Breaking Bad’ creator and writer, Vince Gilligan, has been hired to write the next season of their flagship Sunday morning show, ‘Sunday Service’.

The decision came after many irate TV fanatics voiced their displeasure at the Sabbath themed show, for being predictable, full of clichés and offering no original story-lines for dedicated viewers.

Meath native Liam Holmes (52) regularly tunes into the popular Sunday morning show, currently in its 2014th season, but admitted he has lost faith in RTE’s writers lately, citing a lack of imagination and predictability.

“When you see TV shows like Breaking Bad and The Sopranos, which regularly up the ante with engaging, dramatic storylines, and then compare Sunday Service, it’s just plain embarrassing. The world must be laughing at us.”

Many viewers have been waiting for the show to introduce new characters, shocking plot twists, or original new baddies, but so far the writers have failed to deliver.

“One of the main characters Jesus dies at least once a year.” he continued. “The writers try and surprise you every season by changing the timing of it, but I’ve seen it so many times now that I can actually predict when it’s about to happen. It’s become formulaic and boring.”

RTE have taken flak before for Sunday Service, after an episode featured a heavily pregnant woman being refused shelter from several B&B’s, before being forced to give birth in a barn. Viewers complained that it painted Ireland in a negative light, contrary to the famous warm and friendly hospitality image known around the globe.”

The station hope Gilligan’s style of compelling storytelling and gritty character development will revive the flagging show, and help to stem the ongoing ratings decline.

“I was relieved to hear it to be honest.” revealed avid TV fan Malachy Kivelehan from Donegal Town.  “I liked it at the start, but I kinda lost interest after a few seasons and started watching Sons Of Anarchy instead.” he admitted.

RTE, upon Gilligan’s request, have sent the award-winning writer and director, the last five seasons of Sunday Service on DVD, in the hope that he can get to know characters and possibly offer up a dramatic twist.

In related news, RTE have refused to comment on recent speculation that DJ Calvin Harris has been tasked to create a new updated remix of The Angelus.