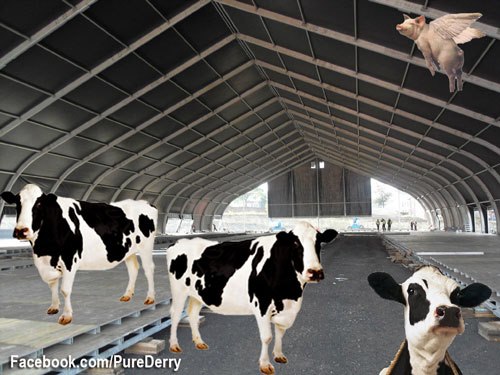 Following the publication of an impressive schedule of events for the City of Culture year, Belfast based news & media outlets have unveiled their own ambitious plans for showcasing Derry-Londonderry in 2013.

Reports suggest that UTV and the Belfast Telegraph (among others) are planning on panic reporting every innocuous negative news story west of the River Bann over the next 18 months – preferably at the expense of allocating airtime to more serious Belfast based news pieces.

“Our policy of pretending that the entire civilised population of Northern Ireland lives in greater Belfast is the cornerstone of our ethos.” said Roland McFucksticks from Blagshit Media. “That said, there are some great acts lined up for City of Culture 2013, and we look forward to giving them prime coverage!.”

“….provided someone up that neck of the woods doesn’t kidnap a wheelie bin and make hostage demands of course. Then we’d be forced to run with the really important news!” he added.

“I’m gutted…” said Belfast based professional mugger Steeky McCrystal. “I beat up two pensioners last year in Ardoyne and when I got home, UTV didn’t even bother to report it!! Instead they were banging on about a man in Creggan who was threatened by a group of kids wielding A4 crayon drawings of handguns. It’s just not fair!!”

On the ground in Derry though the mood is definitely more positive. The diverse range of cultural events planned for 2013 have left everyone impressed and excited. Even Pure Derry, the alternative news publication renowned for giving absolutely everything in town a hard time, admitted that it was pretty immense.

“I’m at a loss how I can write anything negative about such a monumental event happening in my home town” admitted the editor.

“Although they did spend an utterly ridiculous £4.6million on a temporary venue that looks like a cow shed” he added.

It is thought that a business consortium in Dungiven is eyeing up the Ebrington ‘Vital Venue’ as a potential investment opportunity beyond 2013.

“Yed get more heffers than a could shake a stick at into thon shuck” he remarked, apparently making sense to the 17 people in the back of his transit van who were all eating lunch from Family Circle biscuit tins

“If she needs a spot of dry lining giv us a bell sur!” he added before speeding off to find a shop that sold the Daily Sport.

For more information on the great programme of events planned for Derry-Londonderry 2013, visit http://www.cityofculture2013.com/