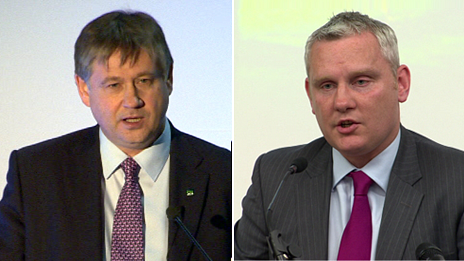 Following the spectacular falling out oft the NI21 leadership, which saw the party implode overnight, both John McCallister and Basil McCrea have cursed their awful luck, that their lives have somehow randomly lead them into a career in politics.

The overall reputation of politicians, who are usually known for their altruism and willingness to serve a cause greater than themselves, has been tarnished this morning by the news, after it became apparent that people with huge personal ambitions to get into well paid positions of respect, were haphazardly finding themselves in jobs within politics.

McCrea and McCallister, who randomly wound up starting a new political party together called NI21, that coincidently aimed to carve out a huge following of middle ground voters, spectacularly fell out on live TV last night, shocking local citizens, who had preciously thought them to be ‘awfully nice fellas with everyone’s best interests at heart’.

Democracy, the process of government used in most countries in the world, was unavailable for comment on these shocking revelations, which suggested that people with private ambitions to be successful and powerful, could simply run for elected office under the auspices of doing good stuff, simply by telling everyone things they want to hear.

The Sinn Fein and DUP leaderships held a joint ‘point and the TV and laugh’ session late night, where they all stood around agreeing that NI21 didn’t really have peoples best interests at heart.

It is understood that after the programme aired, both parties returned to their respective  hollowed-out volcano secret bases, where they stroked cats long into the night, whilst figuring out more ways to help Northern Ireland people stay angry at each other.

Tax payers were understood to be delighted by this news, asking both parties to send their invoices to the HMRC to be squared up immediately.