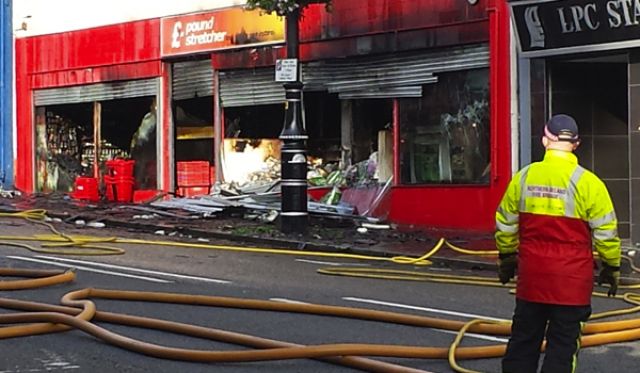 Three floors of Poundstretcher stock were decimated in the fire, a loss which the company’s auditors have estimated to be worth a staggering £32.50. The PSNI say the merchandise had a street value of over £75 million.

Thankfully no one was hurt in the incident, however one republican labelled it a ‘tragic loss’, after realising that the cost of a United Ireland would now rise significantly following the store’s closure. “Poundstretcher did a great range of dirt-cheap paint” lamented local dissident, Cockblock Doherty. “Ye could write a big gammy message in white emulsion on the side of the Derry walls for less than the price of a carryout. This is a huge blow to the cause!”

“Without Poundstretcher, how else will we publicly leave a message on a wall for everyone in Derry to see?!” he continued on his new Facebook page, ‘Another Poundstretcher for Derry’, which had received 10k likes since lunchtime today.

Elsewhere in the city people were saddened by the loss of one of Derry’s finest shopping institutions. “Auch it’s terrible news altogether” said local mother Rubbermaid McLaughlin. “especially cos parking down at thon B&M Bargains is a whole f**king handling. At least in Bishop Street you could double park whilst you quickly nipped in for a few dozen things.” added the 36 year old mother of 12.

The Bishop Street blaze is the second at a famous Derry landmark in recent weeks, after a fire at Creggan’s Hellstar Bar left the pub ‘badly smoke damaged’. Amazingly none of the regulars noticed though, leading doctors to diagnose them as ‘badly smoke damaged too’, following decades of drinking there.  The fire reportedly caused thousands of pounds worth of improvements to the building.

Paying tribute to Poundstretchers today, fellow pocket-shrapnel disciples, Poundland, revealed that they would be opening a book of condolence at their Waterloo Street store for their fallen comrade.