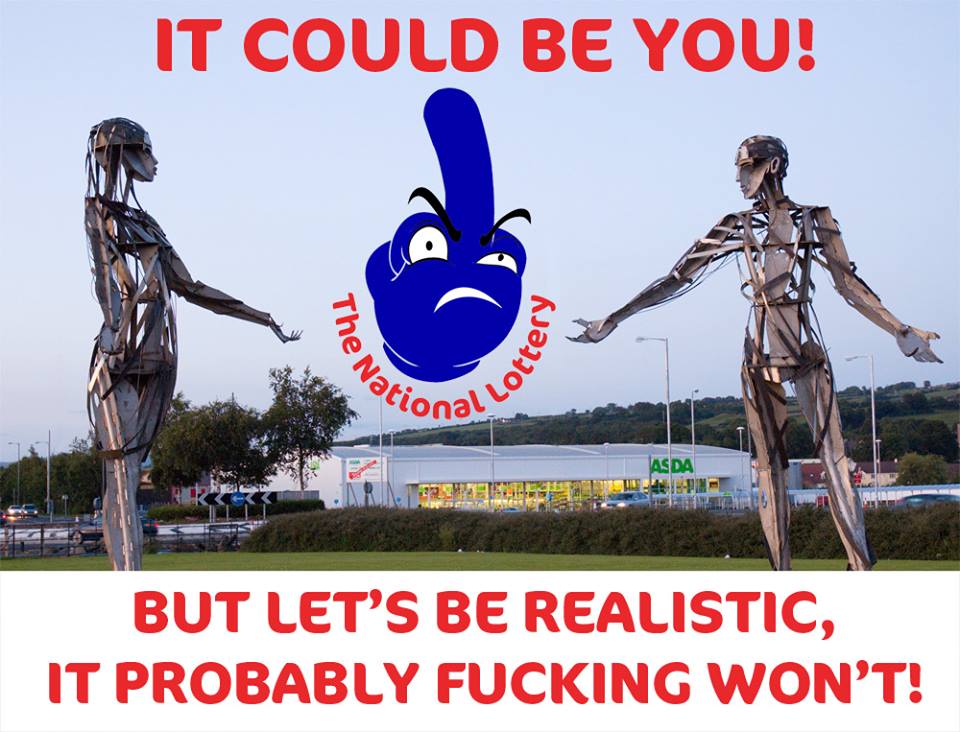 Strabane’s n̶e̶w̶e̶s̶t̶ only wealthy woman, this morning gave an intriguing insight into her plans for her extraordinary new-found fortune. Margaret Loughrey won the £26 million lottery jackpot at the weekend, prompting an outpouring of goodwill and congratulatory messages which left her stunned. “Ack it’s amazing, I’m shocked. All these lovely friendly people that don’t even lik me, telling me how they were pure delighted for me. Jist, ye know, outta the goodness of their wee hearts.”

One such well-wisher, Margaret’s ex-step uncle’s milkman’s cousin, Milxonda Turn. “Aw she’s great, our wee Mary. I mean Margaret. I’ve known her for years. Don’t speak to her, but when I heard about her wee bitta luck I got back in touch to wish her all the best. It’ll not change our Melissa. I mean Margaret.” Milxonda then left in a taxi after hearing that Iceland were doing a special offer on chicken nuggets and £1 wine.

However, a source who wanted to remain anonymous has told Pure Derry that the windfall has already had an impact. Our source, who we will codename Milxy T., chomped eagerly on an Iceland chicken nugget as she disclosed “Thon Melinda, I mean Margaret, thon Margaret is up her own hole now. I saw her buying fags outta Asda instead of the £2.50 Wambert and Rutler we used to smoke. Somebody seen her wey a bottle of Smirnoff and all too. What’s wrong wey the Knickersov that the rest of us drink?”

Margaret revealed that she now plans to use the money to show Strabane in a positive light. “Aye, everybody is so hard on our wee town, ‘speshly them posh Derry bastards. Its actually a really peaceful, nice wee spot.”, she eulogised, as two Superdry-clad louts threw hand grenades at a passing Police landrover.

“So I’m going to use me money to annoy the Derry wans. First I’m going dey buy the Venue and park all my sports cars in it. I mean, serves them right for slagging Strabane, you shouldn’t go around slagging people”, she fumed, as she slagged Derry people for slagging the Venue all year.

Continuing her rant, Margaret produced a legal document declaring her as the proprietor of Asda, Strabane. Over her shoulder, we watched a burly gentleman with a Quality Street tin for a lunchbox and a 1970’s Provo style moustache making a sign saying ‘None a youns Derry wans aloud!’. “See how yous like this…” she whispered menacingly, sipping Asda brand Bucks Fizz from a diamond encrusted mug, “…where are yous gonna stop now for your cheap drink on your way dey concerts and weddings now lik?” she cackled.