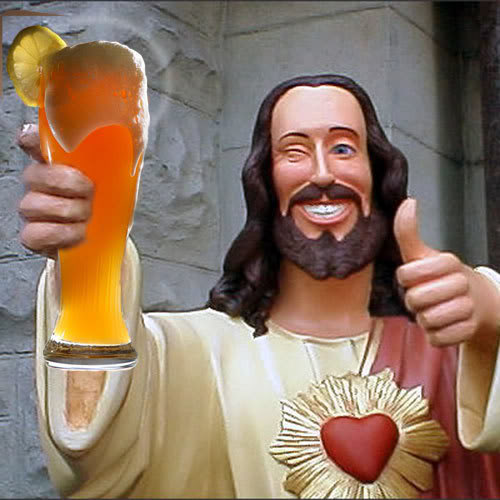 After a year of gluttonous beer drinking and boozing around the Province, often late into the evening and early morning, Jesus Christ today had his wings clipped by his worried parents, after they issued a stern ultimatum to the wayward boozer to be home by 11pm tonight – or else.

Mr Christ, or ‘Jay-C’ as he’s known amongst Belfast’s hipster Cathedral Quarter community, has been a regular fixture at bars throughout the city, where he has developed quite the reputation for drinking pints of oddly named craft beer, whilst skilfully standing upright for hours on end, often in narrow cobblestoned alleyways. It is thought he loves the new found anonymity Northern Ireland offers, as his once dated beard style now allows him to blend effortlessly into crowds of Irish men, without as much as a second glance.

Mary, his worried mother, is reportedly at her wits-end over her sons recent boozing, and has told his father, who oddly appears to also be her father, and everyone else’s too, that she wants him to clampdown on their tear away son, for the sake of his health.

God, who stared blankly at Mary for 10 minutes whilst she harped on about the problem, eventually realised he hadn’t listened to a word she’d said – as he’d been rigorously day dreaming about the multitude of possible outcomes of the 2014 Barclays Premier League. Thankfully though, a nearby arch-angel recorded the entire episode on Tivo, allowing a relieved God to replay the incident in full HD, thus avoiding an entire Easter weekend of dirty looks and snide remarks about how useless he is.

Bellowing angrily around the eternal palace of celestial omnipotence, God reportedly told jesus ‘to turn that f**king racket down’, before loudly exclaiming for all of heaven to hear, that his juvenile offspring were to be home by eleven tonight – or suffer his wrath.

Having reportedly mellowed in recent years, its understood that God’s wrath in the 21st century has evolved somewhat – and now includes changing the Wifi password and not telling you the code, hacking your Twitter and following Piers Morgan, Friend-Requesting people who incessantly post frequent gym & diet updates on FB – and redirecting automated telesales calls to your mobile phone.

The warning seems to have fallen on deaf ears for the meantime though, after an intoxicated Jay-C was spotted trying to get served in Filthy McNasty’s on Belfast’s Dublin road just moments ago, apparently growing ever frustrated that the barman was repeatedly serving women with big tits – whilst continually ignoring him.

Bar owners across the province have taken heed of God’s wishes though, and have promised to cease trade early so that Jesus can be ushered home in a taxi. Jesus has been urged to use a reputable cab company this Easter though, after his journey home in 2013, using a dodgy black-cab that opportunistically picked him up outside the Europa hotel, clocked up a whopping £47,344,775 meter fare, to get to Heaven – via Finaghy and Lisburn.

The rest of the province meanwhile were quick to assure God that they would definitely not be going home to drink a carryout after the pubs closed. Honestly.