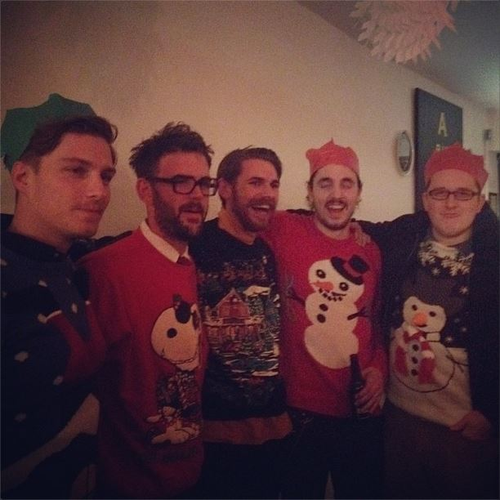 Five local men have been shortlisted to win a prestigious comedy award today, following their recent decision to wear hilariously festive Christmas jumpers in public over the weekend.

Three of the nominee’s were reportedly out on the town together when spotted by judges, thus multiplying the side-splitting comedic effect of their retro fashion statement by 300%. All of them were said to be delighted with the news, however tensions are understood to be building in the group, as long-term friends went up against each other, hoping to gain recognition amongst the global comedy fraternity, for their daring, cutting-edge ebay purchasing decisions.

Dustpan McCartney, who wore a green ‘Christmas tree’ sweater with actual tinsel and baubles on it to his recent work night out, said he was overjoyed this morning when he heard the news.

“Yeah, I was overjoyed this morning when I heard the news” he said, before returning to his follow-up comedy project – reciting lines from Will Ferrell’s 2003 movie – ‘Elf’.

“Did you hear that?!!” he said loudly following a huge forced burp.