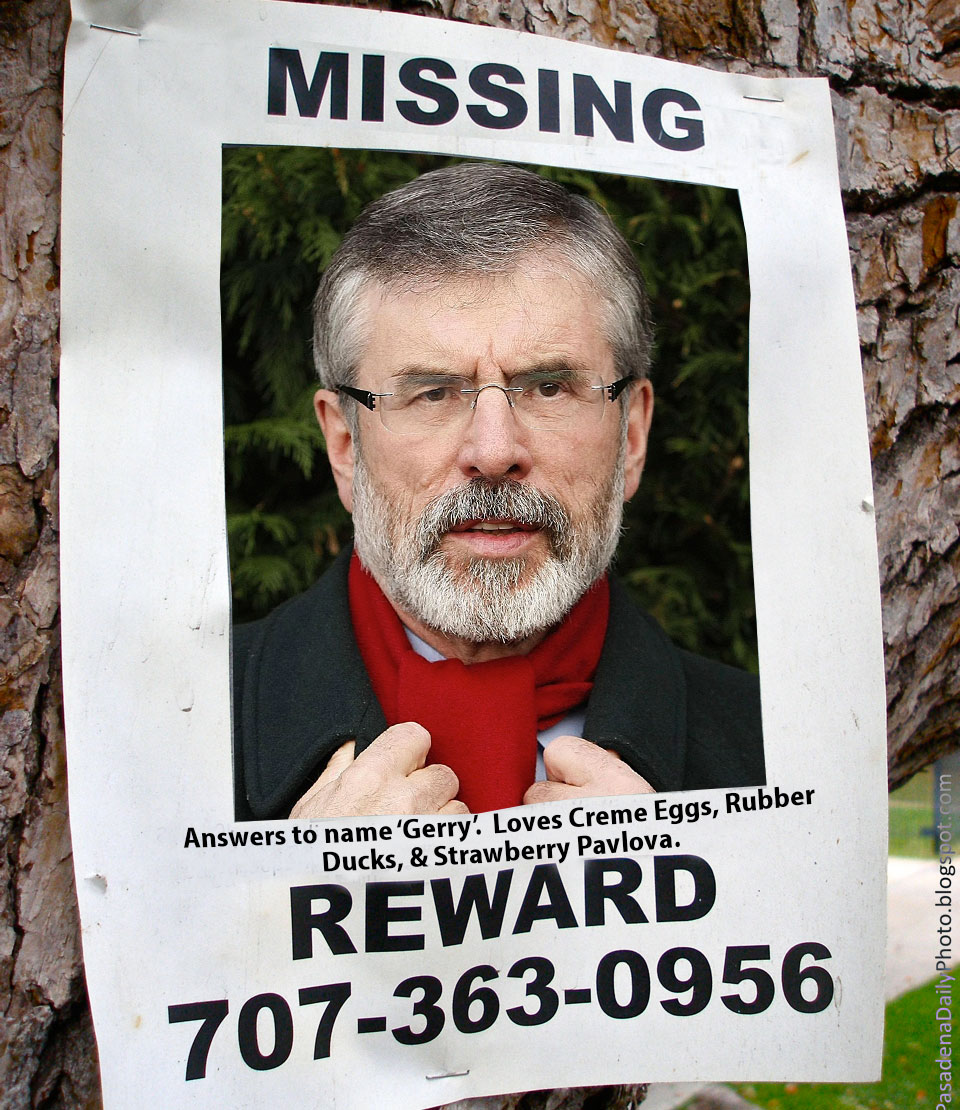 Snowy, the social-media starring pooch of Sinn Fein President Gerry Adams, contacted the PSNI this morning in a state of panic, after his owner failed to come home last night after his walkies. Snowy, who was entirely unaware of his owners detention by local authorities, spent the evening putting up ‘MISSING’ posters around the community, appealing for information on anyone who had seen his beloved owner, for fear that he might never see him again.

Tweeters all across Ireland were utterly distraught at the news, that Republican supremo and social media enthusiast, Gerry Adams, had been reprimanded by authorities over his possible involvement in the abduction and murder of Jean McConville in 1972.

Within seconds of the announcement, tweets began circulating widely across the world, with the slogans “Free ar’ Gerry” and #JusticeFerGerry, trending all across the popular website. However rather than spending time protesting Mr Adams innocence, the prime concern of online supporters behind the Sinn Fein President, seem to revolve around the likely suspension of activity on his popular Twitter page for the foreseeable future.

The Republican leader has gained a reputation since signing up to the site for his random, and often whacky tweets – with post topics ranging from politics and current affairs, to crazy creme eggs dreams, the relationship status of his toy Teddy bears and the unbridled joy of bathing with an assortment of rubber ducks.

Among those defending Adams are various human rights and penal reform groups, who claim “clear signs of senility” are on display within the Sinn Fein leader’s tweets.

Various Irish and British comedians have also voiced their concerns on this matter, with regional Belfast comedian Peter Okay declaring himself devastated by the news, admitting that half his routine revolved around the regular internet chirpings from Adams – and that he may have to cancel his weekend gigs unless the TD is able to return to Twitter before Friday.

In parallel with the Twitter campaign, Republican graffiti artists across Northern Ireland are equally outraged by these revelations, after finding out they will have to add Gerry Adams to the plethora of names that they feel should be ‘FREE NOW’.

On the other dog front meanwhile, Sinn Fein meanwhile were quick to reassure Gerry’s beloved Snowy that they knew where Adams was – and that they would release the information about his whereabouts to him in about 27 years time.