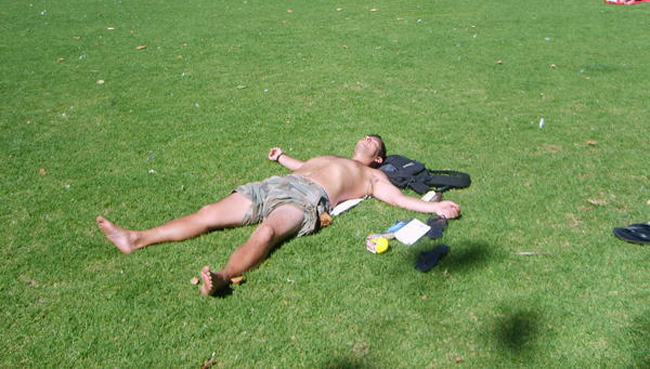 Citizens across Derry were “absolutely horrified” today to discover that they do not live in Florida, according to a report. The revelation came to light earlier after tiny water particles gathered high in the atmosphere above the town, eventually falling onto the city in droplets known as ‘rain’.

The disaster struck after almost two weeks of almost uninterrupted sunshine across the region, a phenomenon which psychologists say has left many residents under the illusion that they live “somewhere dead tropical and snazzy”

“Absolutely gutted” wrote a tanned & semi-naked Deckchair McCormac on Facebook earlier. “Clean forgot that I wasn’t living in the Bahamas. We’re headed to Bananas now instead according to the wife, cos it’s pishing down. FML!”

This is a feeling shared by many. “I haven’t eaten food that’s not been badly barbecued in weeks!” said a depressed Paul Butcher. “In fact I haven’t actually had a meal indoors in about 10 days.” he claimed, pointing to a worn piece of grass on his lawn in the shape of a drunk person. “The wife is the same, she’s inside now Googling instructions on how to use the oven.”

Many others have taken to the internet to complain about the injustice and demand change. “I’ve setup a new Facebook page called ‘Another Heatwave For Derry'” said local activist, Megaphone McCafferty. “It was still sunny today in Belfast and yet it was raining here. I blame Martin McGuinness.”

Depressed residents are now set to return to living in Derry tomorrow, reportedly in normal length trousers, socks and shoes which you can’t see your toes in.

“It’s shite craic altogether” said nicely browned yet browned off local, Paolos O’Doherty, “This time last night I was cycling up and down the quay wiy no socks like Miami Vice, and now I’m pricing oil drums in McGinleys. Talk about a shitemare!”

However in a dramatic late turn of events the sun came out at the time of writing.

“We haven’t a f**king clue whats going on” confirmed a Met Office spokesman.