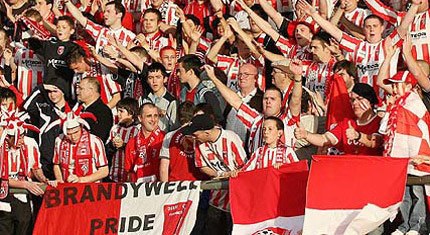 Local shops are reporting dangerously low stocks of Lenor following Derry City FC’s monumental victory over Shelbourne to reach the FAI cup final. Washing machines across the town are said to be working hard to wash mildew and musty smells from vintage replica Derry shirts, as die-hard fans who haven’t been the Brandywell for years, look forward to a big day out to Dublin to support their local team.

Elsewhere, Altnagelvin’s A&E department has been inundated with loyal Derry fans, who have fallen foul of step ladders and attic doors whilst trying to locate their beloved DCFC memorabilia.

“Raging with meself!” said Fleccy McColgan as he cradled a broken arm in a makeshift sling fashioned from an old Derry scarf. “I was convinced my 50ft ‘Spirit of Treble Winners 89’ banner was behind the water tank, but I couldn’t find it!!”

“Although I did find Felix Healy…” he added with a smile. “He was over behind the Christmas decorations reading the oul match day programmes. Me and him sang a few karaoke numbers before I got carried away and went straight through the plasterboard into the wains room!”

Derry beat Shelbourne 0-3 at Tolka Park to secure a place in the final – a statistic which made thousands of local fans extremely happy when they read it on Facebook afterwards.

“I’m made up!” said Creggan McCusker from Pennyburn when we spoke to him walking through Rosemount on his way to the Bogside to catch a lift to Shantallow. “We’ve a 53 seater bus organised to head down…and 36 of the seats are held over for carryout space! Canny wait!!”

The only real concern for Derry is the loss of star supporter Gary Jamieson, who is currently backpacking through Vietnam wearing a dirty wifebeater. The in-form City supporter had been on fire recently at the Brandywell, with a match average tally of starting 8.5 ‘City Til I Die’ sing-along’s per match.

“We’ll miss that level of firepower” said manager Declan Devine. “But I feel we’ve got the experience to cope.”

The final will be staged in Dublin’s Aviva Stadium on Sunday 4 November. Fair weather is expected.