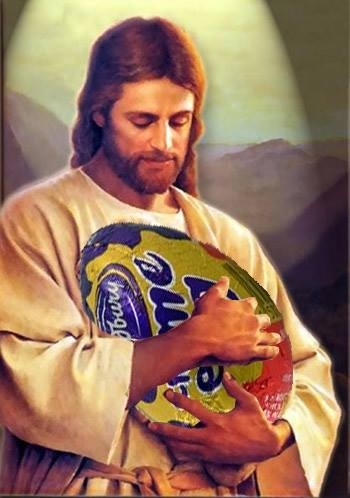 Confectionary lovers across the world were again outraged this weekend, after groups of religious fanatics hijacked Easter’s annual festival of Chocolate – to promote their own selfish cause.

Easter, traditionally a time of year when families gorge on millions of overpriced chocolate eggs, has in recent years been marred by groups of opportunistic Christian zealots, who have chosen to spoil the yearly chocolate munching festival, by incessantly going on about betrayal, death and reanimated zombies.

‘”I swear, every Easter Sunday, just as I’m about to settle down for a nice noon cup of tea and a wee bitta Easter egg, them hoors start ringing them f**king church bells deliberately!’ remarked local man Bleach McCauley.

I actually went up last year to complain, but they were all having some sorta depressing group meeting about ritual cannibalism and bringing people back from the dead. I got the fuck outta there, pronto!’

Bleach continued – “They have Christmas, Lent and countless other holidays throughout the year you think that would be enough but it isn’t! They moan about a continual decline in Church goers, but if yer man Jesus was made of chocolate, numbers would be through the roof for communion!”

Christians were quick to hit back this morning though, citing the lunacy of a group of people who firmly believe that a magic bunny comes to their house once a year to deliver chocolate.

“They peddle their chocolate eggs to fill the pockets of corporate fat cats in stupid belief they are doing some good in the world” he added finally before passing out the collection baskets to the arriving congregation.